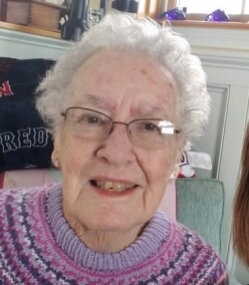 Eastport, ME and Beverly, MA – Barbara Karin (Wolfe) Todd, 96, passed away peacefully on Wednesday, March 3, 2021 at Calais Regional Hospital surrounded by her family. Barbara was born at home in Gloucester, Massachusetts on July 20, 1924, the daughter of Henry and Judith (Larson) Wolfe.

Barbara graduated from Gloucester High School, Class of 1942. Upon graduation, she fulfilled her dream and enrolled and graduated from the Registered Nursing Program at Beverly Hospital, Class of 1945. Barbara worked for several years at Beverly Hospital, becoming a charge nurse. She married Robert W. Todd and eventually took time off to raise their four children. Once her children became older, Barbara returned to nursing until her retirement in 1986.

Barbara was an avid knitter who enjoyed making intricate sweaters, socks and mittens for family and friends. She was also very active in the Beverly Hospital Nurse’s Association for several decades. In her retirement, Barbara and Bob loved traveling, especially visiting Europe and the Western Rocky Mountains. Following Bob’s passing in 2009, Barbara relocated to Eastport, Maine to live with her daughter and son-in-law, Patricia and Bob. While in Eastport, Barbara extended her circle of friends and was a member of the Knit Wits knitting group and enjoyed attending the local senior center.

In addition to her parents Henry and Judith, Barbara was predeceased by her beloved husband Bob of 63 years; her brother John Wolfe and his wife Evelyn; a nephew Thomas; and a niece Alison and her husband Alan. Surviving are her four children, Karin Boyd of Colorado, Charles Todd of Arizona, Judy Brennen and husband Tom of Arizona, and Patricia Todd-Lewis and husband Bob of Maine; five grandchildren; and a great-grandchild.

The family wishes to thank the staff at Washington Place, and the doctors, nurses, and staff at Calais Regional Hospital for the excellent care provided to Barbara.

Barbara will be laid to rest beside her husband in the Central Cemetery in Beverly, MA. Services will be private. In lieu of flowers, donations in Barbara’s memory may be made to a charity of one’s choice. Arrangements by Mays Funeral Home, Calais & Eastport.

To order memorial trees or send flowers to the family in memory of Barbara Todd (Wolfe), please visit our flower store.