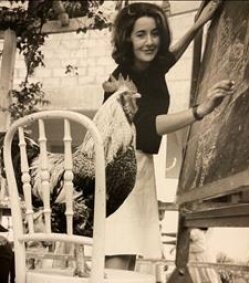 Those who knew Barbara Kendall would not be shocked to learn that as a child she spent hours in her parents’ Upstate New York home sketching fashion photos from Life and Look magazines.

Afterall, her’s was a life brimming with passion, art and adventure. On December 14, Barbara Joy Tetrault Kendall, 84, one of Downeast Maine’s most fashionable, artistic and outgoing dames, a bon vivant who never, ever, ever missed a good party, passed away peacefully in her red brick house in her beloved town of Calais, Maine. Barbara was born in Brentwood, Long Island, New York on September 18th, 1937.

In high school, Barbara’s art teacher recognized a rare talent and advised her to apply for an art school scholarship. She won and spent four years, from 1956 to 1959 attending the New York Phoenix School of Design in New York City. That led to a position as personal assistant to V.G. Simkhovitch, a retired Columbia University professor. In his employ, she lived at his Mansion House in Robbinston, which led to her love of Downeast Maine.

But Barbara was not even close to settling down when, in 1962, she joined the fledgling US Peace Corps where training required her to, among other feats, parachute out of an airplane and swim lengths under water to see how long she could hold her breath.

Her favorite Peace Corps assignment was at an orphanage in Guayaquil, Ecuador, where she taught art and music. Her class’s best still model was a larger than life rooster named Fidel that allowed her to pick him up and set him on a pedestal for five minutes while she prompted her class to scribble as fast as they could. During her tenure she became fluent in Spanish, skied the Andes Mountains, explored the wild Galapagos Islands, and met President and Mrs. John F. Kennedy. Later she even met Caroline Kennedy … in the bathroom at Bergdorf Goodman, a luxurious department store near Central Park.

After the Peace Corps, Barbara returned Downeast and vacationed with friends Virginia Golding Pottle and Helena Simkhovich Didisheim. One evening, she and Helena dolled up and attended a dinner at the Robbinston Ridge Church where she met a handsome stranger, Bill Kendall. The two married at Kendall Farm on December 23, 1966. While living in Robbinston, Princeton and Indian Township Barbara made many friends at Sipayik and Indian Township driving kids to pick raspberries and driving the school bus. She truly admired, appreciated and felt the love of the Passamaquoddy people and their culture.

Shortly thereafter, she worked as one of the founding members of Culturefest which brought classical music and the arts to Washington County. Barbara remained passionate about art and art forms throughout her life, finding great beauty in simplicity and always complimenting a sharp dresser. Lifelong interests included making pencil portraits of people and pets, photography, celebrating the world’s cultural, ethnic, and religious diversity, socializing with her friends and making new ones, travel and contemporary art. She never left the house without a good garnish of her unique jewelry and lipstick - a fashionista until the end!

Barbara is survived by her devoted daughter, Georgiana Joy Kendall, and the father of their daughter, William E. Kendall, her brother and his wife, Roger and Amy Tetrault of Charlotte, NC, and their two children, Jaime Tetrault and Erin Tetrault Richey and families, many loving cousins including Sandra Eaton and Nancy Fox, and a long list of dear friends. She was predeceased by her mother, Dorothy McGuire Tetrault, a nurse, and her father, Richard Tetrault, a steam power engineer.

A heartfelt thank you to two supportive and professional programs serving our area: the care of the Hospice program with Community Health and Counseling Services and the Downeast Hospice Volunteers program. The support that the patient and family receive from these organizations is indescribable.