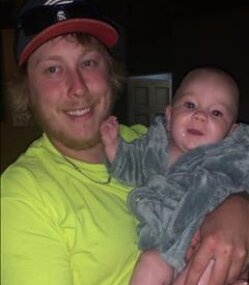 Alexander - Austin David Porter, 26, left us on Tuesday, May 3rd, 2022, as the result of a Motor Vehicle Accident. Austin was born in Calais ME on January 15, 1996, to his parents David and Dana Porter of Alexander, ME.

Austin graduated from Calais High School in 2014. He played soccer all four years which he loved. After high school he went to WCCC for Automotive Technology while working at O’Reilly’s. He then decided to go out and try his hand at welding and was hired on at Cianbro. He gained great friends and made memories that nobody could forget. After traveling for four years, he met Brooke Clark and they traveled for another year together while he worked. After this time Austin took a job at Woodland Pulp to be closer to home and Austin and Brooke were married on August 31st, 2019, in Eastport ME. Austin started his own business “Porter Mobile Welding and Fabrication” which he successfully ran and put his everything into. During those two years Austin and Brooke welcomed their daughter Emersyn “CHEWY” Porter. She was her daddy's pride and joy.

Austin made friends everywhere he went. He spent his time welding and with his two girls. Austin had a rough and tough demeanor but the people who really knew him knows he'd take the shirt off his back or give his last penny he had to someone who needed it.

Austin was predeceased by his grandfather David Porter Sr.; and Uncle, Todd Porter both of Calais, ME. Austin is survived by his wife Brooke Porter and their daughter Emersyn Elizabeth Porter “Chewy” who was his whole world, both of Alexander, ME; his parents David & Dana Porter of Alexander; his sister Lacey Porter of Alexander who he loved beyond words; mother-in-law and her fiancé Tammy Clark and Marty Cushing of Baileyville, ME; father-in-law Richard and his wife Bobbie Clark of Eastport, ME; grandparents Mike & Betty Smith of Alexander, ME, and grandmother Teresa Porter of Calais; grandparents-in-law Richard Gary & Patti Craig of Eastport; aunts and uncles, Diane Lord, Mike and Keitha Smith all of Alexander, and Lorraine and Lee Klug of Ellsworth, ME; cousins Ericka Smith, Amanda Klug, Dylan Lord, Briana Johnston, Logan Lord, Michaela Smith and BJ Moholland; special friends Shawn Sullivan of Day Block Twp, Wendall Davis of Wesley, Willard Doliber of Alexander, Dale Earl of Alexander and William Urquhart of Eastport; Austin’s rescue pups Rebel and Lily; and his cat Smoosh; as well as many more friends and acquaintances.

There will be no services at this time. Donations in Austin’s memory may be made to his wife Brooke and daughter Emersyn at Brooke Porter, 57 Cooper Rd., Alexander, ME 04694. Arrangements by Mays Funeral Home, Calais & Eastport.
To order memorial trees or send flowers to the family in memory of Austin David Porter, please visit our flower store.