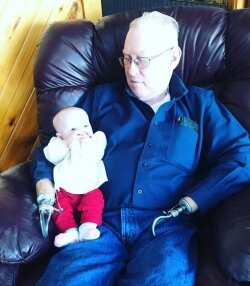 Meddybemps - Arthur Wayne Furlong, 76, of Meddybemps passed away June 4th at Calais Hospital after he lost his toughest battle of all, cancer. He was born in Calais on February 6, 1944, son of the late Doris and Damon Furlong.

Visitation will be held at Arthur’s home, 23 Lake Shore Lane, Meddybemps, on Friday, June 12 from 6 - 8 p.m. A graveside service with military honors will be held 11 a.m. Saturday, June 13 at Round Pond Cemetery in Charlotte. In lieu of flowers, donations may be made in Arthur’s memory to the Charlotte Vol. Fire Department. Arrangements by Mays Funeral Home, Calais & Eastport.
To order memorial trees or send flowers to the family in memory of Arthur Furlong, please visit our flower store.