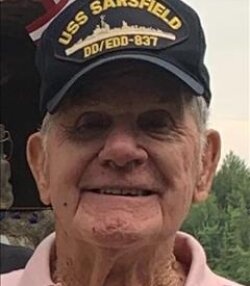 Baileyville – Alvin “Alvie” Hanson Sr, 86, passed away on Wednesday, March 30, 2022 at Down East Community Hospital in Machias. Alvie was born in Calais on July 15, 1935, son of Melvin and Evelyn Hanson of Baileyville.

Alvin, also known as “Butch” growing up, was raised in Baileyville and graduated from Woodland High School. Alvie joined the U.S. Navy and was stationed in Key West, Florida. While there, he took flying lessons and obtained a pilot’s license. Upon one of his visits home, he proposed to Patricia White and they were married on July 15, 1957.

Following his service, they moved back to Baileyville. Alvie went back to work in the mill, retiring with over 40 years of service. He also had a passion for antique cars and rebuilt many. Snow plowing for many years with over 100 customers kept him busy when he wasn’t working in the mill and any off time you could always find him in his garage. Alvie enjoyed building and flying RC planes, playing and listening to music, dancing with his wife Patsy, and loved every minute spent with his family.

In addition to his parents, Alvie was predeceased by his wife Patsy; brothers Edward and Kenny; sister Gladys; sister-in-law Marilyn; and brother-in-law Bill White. Surviving are his three children, Alvin “Butch” Hanson of Baileyville and his children Joseph J. Hanson and his wife Lindsey Royer and Darci Jo Petrov and her husband Kruno, Nanette Chippeaux and husband Don of Wichita, KS and their son Christopher Chippeaux and his fiancée Kristy Shely, and Joseph Troy Hanson and his wife Angela of Alexander and their children, Nicole Hanson, and Joshua Hanson; six great-grandchildren, Braydon, Jonathon, Emerson, Nikola, baby Alvie and baby girl Evelyn Grace; sisters-in-law, Joan Greenlaw of Calais, Nita White of Baileyville and Mildred Hanson of Baileyville; and many friends and extended family.

A Mass of Christian Burial for both Alvie and Patsy will be celebrated 10 a.m. Saturday, May 21, 2022 by Father Brad Morin at St. James the Greater Church, 60 Summit St., Baileyville. Burial will follow in the Woodland Cemetery. Arrangements by Mays Funeral Home, Calais & Eastport.
To order memorial trees or send flowers to the family in memory of Alvin James Hanson Sr., please visit our flower store.