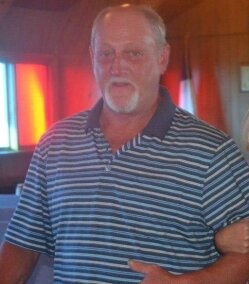 Baileyville – Allen David “Guppy” Guptill, 64, passed away unexpectedly Tuesday, January 12, 2021 at his home in Baileyville. Guppy was born in Machias on August 9, 1956, son of the late Olyn and Betty (Harmon) Guptill.

Allen graduated from Woodland High School, Class of 1974, and on July 20, 1979, married his high school sweetheart and best friend, Jenny Lin Carter. While in high school, Guppy started his career in the logging industry, initially as a truck driver and later as a heavy equipment operator. Allen worked for Orland Dwelley & Son Trucking for 31 years, and at various times for Arnold Beaupre, LC Day, Lee Phelps & Sons, and Herbie Clark.

Guppy was an avid Boston sports fan, supporting the Patriots, Red Sox and Celtics. He enjoyed the outdoors and hunting, fishing, his “hobby”, cutting and splitting 100 cord of firewood each year, and spending time with family and friends on Silver Lake. Family was Guppy’s life. His most cherished times were spent with his grandchildren, who were the apple of his eye. Guppy loved attending Karleigh’s basketball games, and fishing and stacking wood with Brock.

In addition to his parents, Allen was predeceased by his son Josh Guptill; and his mother-in-law and father-in-law, Paula and Leroy Carter. Surviving are his wife of 40 years, Jenny Guptill; his “Angel” and daughter, Alicia Smith and her husband who Guppy considered his second son, Chip of Baileyville; his two grandchildren who he loved dearly, Karleigh and Brock; a sister Sharon Harriman and husband Paul of Topsfield; two brothers, Donald Guptill of Bangor and Brent Guptill and wife Shannon of Princeton; brother-in-law Troy Carter of Chandler, AZ; two nieces, Theresa Worcester and husband Kent of Lincoln, and Patricia Freiwald and husband John of Veazie; many cousins including special cousins Keith Hayward and Gail Garnet and husband Ephriam, and his special cousin and best friend Leo Hayward and his wife Janice; and his feline companion Kitty, who could always be found sitting on the arm of Guppy’s chair, together watching TV.

A celebration of Guppy’s life will be held 2 p.m. Saturday, January 16, 2021 at Mays Funeral Home, 26 Church St., Calais. CDC guidelines such as masks and social distancing are required for all attendees.

To order memorial trees or send flowers to the family in memory of Allen David "Guppy" Guptill, please visit our flower store.