To share your memory on the wall of Warren Moholland, sign in using one of the following options:

But for a short time, living in Santa Ana, California during his youth, he lived his life in Robbinston, Maine. Brub enjoyed rural Maine and the great outdoors where he was able to participate in his favorite pastimes of hunting and fishing. He loved his time spent in nature, in particular on the lake or in the woods of Maine. He also gained great pleasure from participating in and watching athletic events, coin collecting, and playing cards and games with friends and family. Later in life, he enjoyed gardening and running his roadside vegetable stand.

Brub was well known within his community and amassed many life-long friendships through his outgoing personality, love of sports, and working in construction. He also served his country in the United States Army where he was stationed in Fort Dix, NJ, and later in Seoul, Korea. He was particularly proud of his Sharpshooter badge.

Brub was predeceased by his parents Helen and Cy Moholland and his stepfather Levi Hayden all of Robbinston, ME. He is survived by his wife, Timmie, and his brothers Richard Moholland and partner Mary MacDonald of Calais, ME and Owen Moholland of Bangor, ME. He is also survived by his children Rachael and son-in-law Ron York of Kennesaw, GA; Susan and son-in-law Dick Mingo of Robbinston, ME; Tom Moholland and daughter-in-law Cindy of Robbinston, ME; and his step-daughter Cindy Wilson and husband Kevin of New Maryland, N.B., and their children Marcus (34) of Toronto, ONT and Lindsay (30) of Halifax, NS and stepson Ronnie Cloney and wife Lynn of Kingsclear, N.B.; as well as many special nieces and nephews.

Brub was lovingly known as “Papa” to his five surviving grandchildren; Lindsey Mingo (30), Mitchel Mingo (25), both of Jamaica Plain, MA; Austin York (22), Eden York (16), both of Kennesaw, GA; and Colby Moholland (12) of Robbinston, ME. He gained much enjoyment from watching them grow and took great pride in their many opportunities and accomplishments. Papa enjoyed going to their athletic events, playing games with them, and being at family gatherings where he could engage in fun-filled laughs with his grandchildren.

A Spring graveside service for family and friends will be held to remember Brub’s life. In lieu of flowers, donations may be made in his name to the Alzheimer’s Association at http://act.alz.org/goto/Warren_Moholland
Read Less

We encourage you to share your most beloved memories of Warren here, so that the family and other loved ones can always see it. You can upload cherished photographs, or share your favorite stories, and can even comment on those shared by others.

Posted Feb 04, 2020 at 07:32pm
I remember Brub used to make baskets out of alders. He was a lot of fun to talk with while I worked at the Robbinston General Store. He will sadly be missed! ~Wendy
Comment Share
Share via:
CD

Posted Jan 27, 2020 at 08:16pm
Timmie and family.
Please accept my condolences in the passing of a very nice man who was known to everyone as Brub. I well remember him from growing up in Robbinston at a time when everyone knew everyone and it seemed like we were at times one big family.
Candace (Kavanagh) Dwelley Hermon, Me.
Comment Share
Share via:
MB

Posted Jan 24, 2020 at 07:44pm
Timmie, I am so sorry to hear of your loss. My deepest condolences to you and the family--Marilyn (Simpson) Brown, Grand Lkae Stream, Maine
Comment Share
Share via: 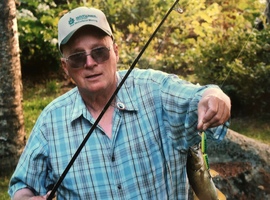