To share your memory on the wall of Shirley Murphy, sign in using one of the following options:

In addition to her parents, Shirley was predeceased by her beloved husband Clarence; a son John; three sisters, and brothers-in-law, Christine and Manzer Duplissea, Margaret and Ben Reilly and Doris and John McSorley; two nephews, Michael John McSorley and Douglas Duplissea and a son-in-law, Joseph McGovern.

She was a member and held positions of all offices of the William T. Wren Unit # 23 American Legion Auxiliary in Baileyville. Shirley enjoyed bowling and for years was a member of the Ladies Bowling League at the Spednic Club in Baileyville, and a regular with The Tuesday Night League and The Candy Town Senior Bowlers, both in St. Stephen. She also enjoyed playing Beano. Her happiest moments were spent with her beloved family at their camp at the Lamb Farm.

Shirley is survived by her two children, Cindy A. McGovern of Machias, and Michael E. Murphy and his wife Susan, of Baileyville; five granddaughters, Erica Pike and significant other Jason Croman of Alexander, Jessica Murphy and significant other Andrew McBrine of Hermon, Melissa Pike of Corrina, Katie Sawyer and husband Matthew of Carmel, and Alexandra LaChapelle of Machias; four great grandchildren, Connor and Ava Croman, Isabella Mathews and Alayna McBrine; and two special nephews, Herb Duplissea and his wife Lyn, and Gordon Reilly and wife Sandy.

A special thank you to her two caregivers, Brenda McPhail and Chrissy Parker, who went above and beyond in their care and comfort they provided to Shirley.

A graveside service, to be held at Woodland Cemetery in Baileyville will be announced in the coming weeks. Arrangements by Mays Funeral Home, Calais & Eastport.
Read Less

Receive notifications about information and event scheduling for Shirley

Consider providing a gift of comfort for the family of Shirley Murphy by sending flowers.

We encourage you to share your most beloved memories of Shirley here, so that the family and other loved ones can always see it. You can upload cherished photographs, or share your favorite stories, and can even comment on those shared by others.

Posted Feb 27, 2020 at 11:12am
I wish to extend my condolences to Cindy, Michael & John’s family on the death of your Mom. It has been many years since we saw each other, but have good memories of you all when you would come to visit your grandparents. My Mom had loads of stories of your aunts & Mom, as they all grew up together over the years. They had great times & fun, & over the years when Aunt Margaret & Uncle ‘Spike’ would come for a visit, there were lots of get togethers in St. Stephen & Woodland. Cherish the years that you had with your Mom & those memories will see you all through life.
Comment Share
Share via:
JD

Posted Feb 23, 2020 at 08:47am
Lori and I are very sorry for the loss of Shirley. She was a wonderful, kind, caring lady which we have known most of our lives. She loved her family and cherished her time with them during get together's at camp and other gatherings throughout the year. She always made me feel like I was a part of the family and I will miss her very much. It was a priority for me to visit Shirley and Clarence at Christmas time. I will now think of them on that day and be thankful for our times together.

Thinking of you all,

Posted Feb 20, 2020 at 08:12am
My Sincerest condolences to Shirley Murphy's family for their loss. She was a very nice lady and I am sure she will be missed by all that knew her
Comment Share
Share via:
F

Posted Feb 19, 2020 at 06:57am
Our sincere condolences, Shirley was a sweet lady. Miss talking with her at the food
mart and sharing our thoughts on COPD, breath easier my friend where the air is clean and fresh and every breath is gentle. Fly high with the angels
Comment Share
Share via: 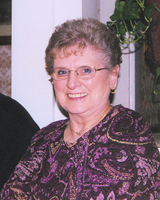