To share your memory on the wall of Richard Carroll, sign in using one of the following options:

Print
Baileyville – Richard Lawrence Carroll, 86, passed away at his home on June 16, 2020. Richard was born in Winchester, MA on Christmas day, 1933, son of Stephen and Ethel (Delaney) Carroll.

He grew up in Belmont, MA where he graduate... Read More
Baileyville – Richard Lawrence Carroll, 86, passed away at his home on June 16, 2020. Richard was born in Winchester, MA on Christmas day, 1933, son of Stephen and Ethel (Delaney) Carroll.

He grew up in Belmont, MA where he graduated Belmont High School, class of 1951. Richard was drafted into the US Army. He was sent to Korea and served with the 2nd and 7th infantry divisions in the Armor Tanks unit. Once he returned home, he attended the University of Massachusetts where he earned a bachelor’s degree in business administration and transportation. During his senior year, Richard was awarded an apprenticeship with Emery Worldwide, he ended up staying with the company for the next 29 years. He retired from Emery Worldwide as regional manager for the Canadian Maritime Provinces, last stationed in Halifax. Soon after Richard relocated to Baileyville where he became an active member of his community. He held the position of Chaplin with American Legion William T. Wren Post 23 in Baileyville and earned his 4th degree with The Knights of Columbus. Richard was a member of St. James the Greater R.C. Church and he enjoyed bowling at the Spednic Club in Baileyville.

Richard will be remembered by the many lives he touched throughout the years included friends, Dr. Earl Baker and his wife June of Nova Scotia and MA, Pat Yardley, Lisa and Derek Howard, Norman, Jamie, Paula, Joy, Sharon and Lisa; he is also survived by his companion, Smokie the cat.

Receive notifications about information and event scheduling for Richard

Consider providing a gift of comfort for the family of Richard Carroll by sending flowers.

We encourage you to share your most beloved memories of Richard here, so that the family and other loved ones can always see it. You can upload cherished photographs, or share your favorite stories, and can even comment on those shared by others.

Posted Jun 18, 2020 at 08:15pm
Dear friends
May the God of Hope give you the fullness of peace, and may the Lord of Life always be with you. + Eternal rest grant unto him, O Lord, and may perpetual light shine upon him. May his soul, and all the souls of the faithful departed, through the mercy of God, rest in peace. Amen
Comment Share
Share via: 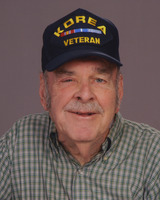