To share your memory on the wall of Raymond Faulkner, sign in using one of the following options:

After graduating high school in Island Falls, Ray worked for the Island Falls Hardware until enlisting in the U.S. Air Force. Following his service, he returned home and went back to work for Island Falls Hardware until starting his career in the service department at Pratt Ford in Millinocket. In 1978, Ray relocated to Calais to help set up the new Pratt Ford location where he served as the service manager. He eventually returned to Millinocket where he retired from Perley Wheaton Ford. Ray loved spending time with his family, especially his grandchildren.

A celebration of Ray’s life will be held at a later date. Arrangements by Mays Funeral Home, Calais & Eastport.
Read Less

Receive notifications about information and event scheduling for Raymond

We encourage you to share your most beloved memories of Raymond here, so that the family and other loved ones can always see it. You can upload cherished photographs, or share your favorite stories, and can even comment on those shared by others.

Posted Sep 23, 2020 at 06:21pm
Condolences to the Faulkner family. I met Ray many years ago at Pratt Ford in Calais and became good friends. Had a few crazy times together. Goodbye old friend.
Carl Ripley
Comment Share
Share via:
JY 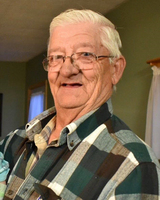