To share your memory on the wall of Pierre Woog, sign in using one of the following options:

Print
Eastport - Dr. Pierre Charles Woog, professor, husband, father and force of nature who was known for his passionate generosity and persistent curiosity, died peacefully on September 8 at his home in Eastport, Maine. He was 78.

Dr. Woog w... Read More
Eastport - Dr. Pierre Charles Woog, professor, husband, father and force of nature who was known for his passionate generosity and persistent curiosity, died peacefully on September 8 at his home in Eastport, Maine. He was 78.

Dr. Woog was born in Laboule, France to Roger and Renee Woog. Roger was a film producer in Paris, but Pierre was born on the run; the family was Jewish and fleeing the German occupation of France. They disembarked from Lisbon, Portugal and arrived in Baltimore, Maryland in 1942 after surviving a harrowing 6-week journey across the Atlantic.

Dr. Woog grew up in Hollywood, California and Long Island, New York. He was struck by polio in 1948, but through the devotion of his mother who oversaw his recovery, survived and grew to be a successful athlete and then athletic coach during his teaching years. By age 21, he had a young family and a college degree: he married Elizabeth Sabatella in 1962, soon had twin sons Keith and Kevin in May 1963, and graduated from Hofstra University that same year with a degree in history and political science.

Dr. Woog started his career in education as a fourth-grade teacher in Middle Island, New York. He was studying for his Master’s Degree in education in 1968 when he was recruited into a Ph.D. program at Hofstra. Dr. Woog graduated with his Ph.D. in educational psychology from Hofstra University in 1971 and became a professor at his alma mater. He moved to Adelphi University in 1976. His rise in higher education culminated in receiving tenure and a full professorship in nursing and education in 1983 and serving as Founding Dean of the School of Education at Adelphi University from 1984 to 1986. During his almost 40-year career, he founded Scholarly Inquiry for Nursing Practice: An International Journal, edited the award-winning book The Chronic Illness Trajectory Framework (1992), mentored scores of doctoral students and chaired dozens of dissertations, and published over 90 articles, reports and book chapters. Dr. Woog also prioritized working beyond the academy, regularly doing research and evaluation with schools, universities and nursing homes and having served on the National Review Committee of the American Nurses’ Association, which elevated the Nurse Practitioner profession.

Dr. Woog met and fell in love with Kendall Zeigler in 1980. She was his “all-American girl” from Corvallis, Oregon. They met at a conference in West Virginia and in 1981 she packed up her Toyota with her dog Joey and grandmother’s rocking chair to trek across the country to Long Island so they could start their life together. They settled in Long Beach, New York, married in 1982 and had twins Amanda and Sarah in 1984. They experienced tragedy in 1985 with the death of Pierre’s beloved son Keith, a rising artist, but Pierre’s absolute dedication to his young family kept him going amid the heartbreak. The family moved to Port Jervis, New York in 1986 and then Milford, Pennsylvania in 1994. Though he stepped down from his deanship in 1986, Dr. Woog continued as full professor at Adelphi University until 2001.

Dr. Woog was diagnosed with chronic heart disease and underwent quadruple bypass surgery in 1996. The event utterly changed and limited his life, but he found pride and joy in his family, volunteering, voracious reading, analyzing, puzzles, wood sculpture, and marveling at the wonder of the world. He and Kendall moved to the island city of Eastport, Maine in 2007. Dr. Woog was drawn throughout his life to the ocean, and he could be found in their yard with the sun on his skin and a dog by his side, taking in the sea air and devouring his latest book.

Dr. Woog was moved in his life to bear witness and pursue justice due to his origin story: he fled fascism as a baby and survived the Holocaust. He was a proud iconoclast, never hesitating to confront injustice or Susan Collins supporters. He had an incredibly open heart and home, both of which he made available to people without homes, wanderers, friends, students, and children through the Fresh Air Fund. He volunteered at various times with People for People in Middletown, New York, the Democratic Party, food pantries and libraries. He lived to “tilt the world a little more toward light” and encouraged others to as well. Despite being marked by tragedy and survival, he built a life he could be proud of with deep love for and from his wife and daughters. He always said he did the best he could. And he did.

Dr. Woog was a lifelong contributor to social justice causes. Those wishing to memorialize him may do so through contributions to the ACLU, Planned Parenthood, Southern Poverty Law Center, Anti-Defamation League, Texas Fair Defense Project or Hofstra University. He may also be memorialized through acts that tilt the world a little more toward light.

His daughters and wife wrote this obituary and sure wish he was here to edit it, as he would insist on doing.

Receive notifications about information and event scheduling for Pierre

We encourage you to share your most beloved memories of Pierre here, so that the family and other loved ones can always see it. You can upload cherished photographs, or share your favorite stories, and can even comment on those shared by others. 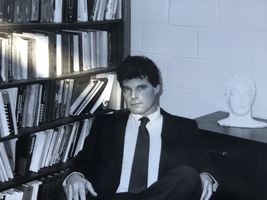