To share your memory on the wall of Pauline Rayner, sign in using one of the following options:

Provide comfort for the family of Pauline Rayner with a meaningful gesture of sympathy.

She was married to the late Edward Rayner and moved to Calais in 1960. She loved the outdoors, taking walks, gardening, bowling, a good Danielle Steele book, having coffee with friends and sitting on her porch swing talking and laughing with friends and family. She was a member of the Fire Hall #1 Restoration Group and enjoyed going to the meeting s and the pot luck suppers. She worked at the Calais Hospital for 30 years and had fond memories of her many friendships she had made there.

She was predeceased by her two sons, Jimmy and Junior, her brother Alex and sister Bessie.
She is survived by her daughter Ellen Boyer and her husband Bill of Standish, sons Jackie and his wife Brenda of Grand Manan, Danny and his wife Peggy of Ft. Kent and Stephen and his wife Cathy of Spruce Head, ten grandchildren, sixteen great grandchildren and two great, great grandchildren. She is also survived by her niece Mary Ann O’Brien and husband Wilfred, whom she was very close to and spent a lot of time venturing and going out for lunch. Niece Diane Greene and husband Joey of Grand Manan and nephews Bill Dowling of St. Stephen and Doug Clinch and wife Ting of Grand Manan. A special thank you to friends Artie and Amy Pike for all their help and support, Joy York for all the coffee outings and Sally Nelligan and Gladys Greenlaw for their adventures and shenanigans.

In lieu of flowers, be kind, don’t judge people, live each day like it’s your last, call your mom, spend time with family, thank God every day for your blessings and for those who wish to can make a donation to their favorite charity in her name.

A Mass of Christian Burial will be celebrated by Father Kevin J. Martin 11 a.m. Thursday, February 13, 2020. Visitation will be held at the church prior to the Mass, beginning at 10 a.m. Burial will follow in the Milltown Catholic Cemetery, St. Stephen, NB. Arrangements by Mays Funeral Home, Calais.
Read Less

Consider providing a gift of comfort for the family of Pauline Rayner by sending flowers.

We encourage you to share your most beloved memories of Pauline here, so that the family and other loved ones can always see it. You can upload cherished photographs, or share your favorite stories, and can even comment on those shared by others.

Posted Feb 13, 2020 at 03:16pm
Condolences to the family of Pauline Rayner. Pauline was my neighbor, coworker, and friend for many many years. I loved our chats and tea on her porch swing. She will be very missed on Monroe Street.

Posted Feb 11, 2020 at 05:01pm
Dear Ellie and Pauline's family, I am so sorry learn of your mom's passing. I remember her from when you were in high school and from her years at Calais Hospital. Such a sweet lady. Cherish your memories.
Comment Share
Share via: 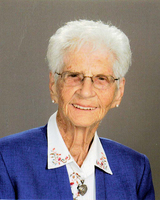