To share your memory on the wall of Patricia McCoubrey, sign in using one of the following options:

Together, she and George raised their three children in Calais. She took some time off from work when her children were small, but kept busy as a telephone operator, a bank teller at the First and she later worked as a cashier at both Johnson’s Hardware and then the IGA. Pat spent much of her childhood in Eastport which always held a special place in her heart, visiting as often as she could. She also moved to Virginia for a short time but always knew Calais was home. Pat loved to read and challenge herself with crossword puzzles. She was a dedicated mother and grandmother, Patricia lived for her family, especially her grandchildren.

She was predeceased by her husband George in 2018 after 51 years of marriage as well as her parents and sister, Shirley Jack.

Patricia is survived by her three children, Sherri Reynolds and her husband Robert of Calais, William McCoubrey and his wife Karen of New Hartford, CT and Carl McCoubrey of Calais; four grandchildren, Ashley Reynolds of Brewer, Emily Reynolds of Westbrook, and Liam and Kian McCoubrey, both of New Hartford, CT; her sister, Rebecca Stanhope of Zephyrhills, FL; sisters-in-law, Susan Dooley and her husband Richard of Baileyville, Linda McCoubrey and Kumcha McCoubrey, both of Calais; brother-in-law, Thomas Jack of NC and many nieces, nephews and friends.

A graveside service will be held 1:00 pm, Saturday, November 7th at Calais Cemetery. Anyone who plans to attend is asked to please wear a mask and follow the CDC recommendations concerning Covid-19 prevention. Donations in Pat’s memory can be made to Alzheimer’s Associations Maine Chapter at https://www.alz.org/maine. Arrangements by Mays Funeral Home, Calais & Eastport.
Read Less

Receive notifications about information and event scheduling for Patricia

Consider providing a gift of comfort for the family of Patricia McCoubrey by sending flowers.

We encourage you to share your most beloved memories of Patricia here, so that the family and other loved ones can always see it. You can upload cherished photographs, or share your favorite stories, and can even comment on those shared by others.

Posted Nov 03, 2020 at 07:46pm
Sherri, Bill and Carl,
I am so sorry for the loss of your Mom.
Her and George are together again. I will be thinking of you all the next few days.
Much love,
Lisa Doten
Comment Share
Share via:
MF

Posted Oct 25, 2020 at 07:19pm
Sherri, Billy, Carl & families...Thinking of you all. Sending all our love and condolences. I’ll never forget all the childhood memories; all the Christmas’s spent going from house to house, the get together’s at Gram & Gramps, all of those family yard sales! And it was nice seeing both your mom and dad when they traveled back and forth to the south from time to time and landed in NC for a visit along the way. I hope Aunt Pat is now at peace and will keep all of those memories close to my heart.
Comment Share
Share via:
EL

Posted Oct 24, 2020 at 01:03pm
Condolences to the family she and George were great friends of Eds and mine ED grew up with the Mcoubreys on Monre ST.SHE WAS A REAL NICE LADY SO SORRY.
Comment Share
Share via:
BM

Posted Oct 23, 2020 at 08:23pm
To Sherry, Bill, Carl and families: So sorry to read of Pat's passing. She was a good friend and we had a lot of laughs while working together at The First. So happy she and George visited us when she had eye surgery. Alzheimers took away this beautiful lady but now she is at peace. You will be missed Pat and fondly remembered by all of us who worked with you over the years. Sending our prayers and thoughts to all of you as you grieve the loss of this lovely woman.
Comment Share
Share via: 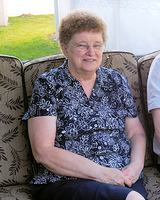