To share your memory on the wall of Marion McLean, sign in using one of the following options:

Besides her parents, she was predeceased by her husband Robert, her one and only love, who died in 1987. She also lost her brother Carlton, and her brother Herbert “Herbie” and his wife Wanda Lee.

She will be fondly remembered by her son Jeffrey and daughter-in-law Leah; her granddaughter Meredith Robitaille and her husband Jeremy; two grandsons Seth McLean and his wife Kristy Wagner, and Russell McLean; three great-grandchildren, Quinn Robitaille, Ronan McLean and Alex Robitaille; two nephews, William “Bill” and Jeannie Lee, and Troy Lee and their families; cousins Freda and Norm Provost and Dorothy and Bob Amadei; and many nieces and nephews from the McLean side of the family.

At her request there will be no visitation. A graveside service with Father Kevin J. Martin officiating will be held 1 p.m. Wednesday, October 9, 2019 at Calais Cemetery. Arrangements by Mays Funeral Home, Calais.
Read Less

Consider providing a gift of comfort for the family of Marion McLean by sending flowers.

We encourage you to share your most beloved memories of Marion here, so that the family and other loved ones can always see it. You can upload cherished photographs, or share your favorite stories, and can even comment on those shared by others.

Posted Oct 05, 2019 at 07:22pm
We
Marion’s was always the home for family to meet. When we were coming to town, Marion would let the cousins know and we would all meet there. Marion loved her Lee family relatives and she meant a lot to us. We will miss you. You are now resting without pain. Til we meet again, love you, Patsy and Forrest
Comment Share
Share via:
C

Posted Oct 04, 2019 at 05:50pm
A lifetime neighbor , friend, family.. the union.. “ mud lane” will never be the same without Auntie Marion , May she be greeted with open arms reuniting with her only love , the rest of her family members and all of the union street crew.. we will sure miss you, give mom and dad a hug a kiss for me.. until ..
Comment Share
Share via:
RM

Posted Oct 04, 2019 at 05:06pm
although I was not close to Marion in later years. We used to play together when we were kids.
Her mom, Jane was close to me until her passing. I am sorry for your loss, God Bless you and comfort you in this time
of sorrow
Comment Share
Share via:
FM

Posted Oct 04, 2019 at 04:50pm
Dear family: May the God of Hope give you the fullness of peace, and may the Lord of Life always be with you. May Marion's soul, and all the souls of the faithful departed, through the mercy of God, rest in peace. Amen.
Comment Share
Share via: 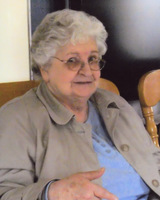