To share your memory on the wall of Joan Corning, sign in using one of the following options:

Provide comfort for the family of Joan Corning with a meaningful gesture of sympathy.

My mother Joan Marie Corning, 73, of Calais, Maine passed away on Saturday January 11th under Hospice Care at Eastern Maine Medical Center in Bangor. She was the youngest of four children, born November 9, 1946 to Ro... Read More
By son Ron Corning

My mother Joan Marie Corning, 73, of Calais, Maine passed away on Saturday January 11th under Hospice Care at Eastern Maine Medical Center in Bangor. She was the youngest of four children, born November 9, 1946 to Ross and Christine Mowatt. She grew up and lived most of her adult life on Price Street. My mom was a homemaker at heart, who opened her home and her heart to friends and family. She loved to entertain, host card games, plan events for her Calais High School class of ‘65 classmates, and feed everyone (and serve up a drink or two). She had a remarkable gift to connect with the people around her, including her fellow residents and the staff at Colonial Nursing Home in Lincoln, Maine where she had lived since 2014. Her Lincoln nieces Jackie Page, Pam Page, Lynette Leighton and their children helped make mom feel ‘at home’ in their hometown. She spent her last Christmas with them a few weeks ago.

In 1986 we watched her defy the odds after a massive head injury. Her recovery was a testament to her fighting spirit and her will to live. She was forever grateful for the friends and neighbors who established the Joan Corning Rehabilitation Fund to cover the cost of home nursing care and rehabilitation that helped her get back on her feet. Several years later she would donate the remaining funds to a teen-aged head injury survivor to help pay for his care. Mom was ‘paying it forward’ before we even knew the term. And she never failed to remind me to live life to the fullest, because she knew firsthand you never know what tomorrow holds. In fact, despite her own limitations she embraced the chance to visit me all over the country as I built a life and career of my own. She was almost 50 when she took her first flight and kept racking up miles traveling to Ohio, St. Louis, Seattle, Dallas, and New York City. Mom often flew alone making friends with the airline attendants who assisted her along the way.

I felt blessed to hold her hand in those final minutes as she listened to ‘Take Me Home Country Roads’. Also with her was my dad and her husband of 28 years, Arnold Corning. He was her beloved friend and caretaker even after their separation, with the support of his life partner of 23 years Barbara Clark. Also with her, niece Jackie Page and her husband Jeff.

Pastor Mitch Bickford and his wife Brenda kept vigil with us, assuring us that mom believed this world was not her permanent home; she was just passing through.

While ‘passing through’ to the next great adventure my mother Joan Corning touched many lives, and will not be forgotten. May she rest in peace.

A celebration of Joan’s life will be held in the summer. In lieu of flowers donations can be made in Joan Corning’s name to the Brain Injury Association of Maine at www.biausa.org Arrangements by Mays Funeral Home, Calais.
Read Less

Consider providing a gift of comfort for the family of Joan Corning by sending flowers.

We encourage you to share your most beloved memories of Joan here, so that the family and other loved ones can always see it. You can upload cherished photographs, or share your favorite stories, and can even comment on those shared by others.

Posted Jan 18, 2020 at 08:45pm
Our family has been so blessed to have known Mrs. Corning for the few years she resided at Colonial Acres. She always had loving, encouraging words for us, whether it would concern staying safe in our travels in a snowstorm or raving about the treats we served on Monday nights ("You're an excellent cook!) or even expressing her sweet tearful condolences to us concerning our daughter, Heidi, (whom she had conversed with many Monday nights) who had just taken her life October 4, 2018. One of our special memories was watching Enoch, who miraculously survived his mommy's (Heidi's) suicide, help wheel Mrs. Corning back to her room, holding her hand, while an adult pushed. One time, we even heard him say, "Good bye, Corn!" So long, Mrs. Corning, for now..... We will see you again in Heaven!
Comment Share
Share via:
BM

Posted Jan 13, 2020 at 12:59pm
To Ron and Family: Sorry to hear of Joan's passing. A vibrant happy young woman who had a horrible accident and recovered enough to live a life that taught others what bravery is all about. She was amazing and we will always remember her laughter. Fondly remembered. Bob and Mary Lou McGraw
Comment Share
Share via:

So well said. Thank you both ♥️ -Ron
NG

Posted Jan 13, 2020 at 11:40am
Oh sweet, sweet Joan you will be missed so badly. You were a remarkable woman who I never heard complain no matter how rough the going got. Fly high Sweet Lady.
Comment Share
Share via:

Posted Jan 13, 2020 at 10:03am
Sending my sincere condolences to Arnold as well as the rest of Joan's family.
She was a lovely person and also a classmate of my sister Mary Channell.
Comment Share
Share via: 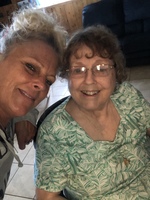 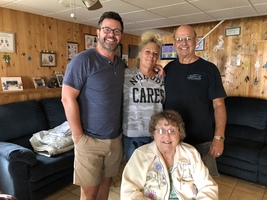 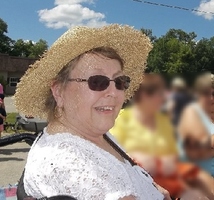