To share your memory on the wall of Howard Pike Seavey, sign in using one of the following options:

After attending school in Crawford, Pike went to work in the woods with his brothers from 1944 to 1948. He then enlisted in the United States Marine Corps, serving as a Crypto Analyst. Pike was a Veteran of the Korean War and the Vietnam War. While serving in the Marines, he was proud to have witnessed John Glenn being launched into space and was directly involved in the intelligence activities during the USS Pueblo crisis with North Korea in 1968. After serving in the Marines for over 20 years, Pike retired and moved back home to Maine where he owned and operated the Philips 66 on Main Street in Woodland. He took great pride in offering area residents quality service. Pike then went on to work for the Maine Department of Transportation, retiring as a Crew Leader, with 20 years of service.

Pike believed strongly in Family and the responsibilities that go along with providing for and caring for each member. As a young man in the service, he regularly sent money home to his mother Gertrude Seavey that she used to purchase the farm in Alexander. The farm eventually became Pike’s, and he and Maxine spent many happy years there raising horses and cattle, growing gardens, and reclaiming the fields. One of Pike’s greatest joys was to work the land, and he was in fact helping bale hay just days before his passing. Not every 82-year old man survives being run over by a tractor, but Pike did! That story became one of the treasured Pike Seavey stories that his children and grand-children hold dear.

A very principled man, Pike had with a strong sense of right and wrong that he imparted to his children. He believed that if you are going to do something, you do your very best and you do it correctly. In the Marines, for example, he was determined to learn the job better than anyone else and perform his duties with the utmost professionalism, regardless of the hours and hours of extra studying he put in to make that happen. In spite of his lack of experience, Pike took it upon his self to research and learn carpentry so that he could build his camp on Crawford Lake. He loved to point out that there was only one visible nail in the entire camp. All of those traits have been passed down to his children, and they cherish the impact he has had on their lives.
Pike was an avid hunter and loved fishing particularly on Crawford Lake. Since he was a boy in the 1930s when he fished on Crawford Lake with his father, he never tired of the nature and scenery between Crawford Lake and Pocomoonshine Lake. He especially enjoyed being a tour guide for family and friends on those trips!

Serving others was very important to Pike, and he was a great supporter of the Alexander school, area festivals and local events. He was a member of the Alexander Grange, Past Master of St. Croix Lodge No. 46 A.F. & A.M., Past High Priest of St. Croix Chapter No. 17 Royal Arch Masons, St. Croix Council No. 11, Hugh de Paynes Commandery No. 11 Knights Templar, Past Patron of Orion Chapter No. 45 O.E.S., a Shriner with Anah Temple in Bangor, life-time member of the American Legion, and past member of the Spednic Club. Pike was also an avid Red Sox, Patriots and Celtics fan.

In addition to his parents, he was predeceased by his first wife and mother to his children, Joan (Dalton) Mitchell; his second wife, Maxine (Yattaw) Seavey; and his son Chuck Seavey. Surviving are his children, Anne Newell of Crawford, David Seavey and wife Lisa of Olympia, WA, Karen Frederick of Silverdale, WA, Howard John Seavey and wife Stephanie of Crawford, Linda Varney and husband Tim of Osborn, Bradley Simmons and wife Julie of East Boothbay, and Tracy Seavey of Machias; his sister Helen Sinko of PA; many grandchildren and great-grandchildren whom he loved dearly; numerous nieces and nephews; and his canine companion Marley, and feline companion Kelly.

A graveside service with Military Honors will be held at 11:00 am on Saturday, 22 August at the Alexander Cemetery with John Gallant officiating. Arrangements by Mays Funeral Home, Calais & Eastport.
Read Less

Receive notifications about information and event scheduling for Howard Pike

Consider providing a gift of comfort for the family of Howard Pike Seavey by sending flowers.

We encourage you to share your most beloved memories of Howard Pike here, so that the family and other loved ones can always see it. You can upload cherished photographs, or share your favorite stories, and can even comment on those shared by others. 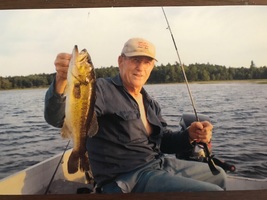 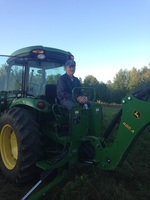 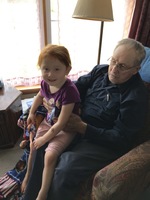