To share your memory on the wall of Frederick Wallace, sign in using one of the following options:

Provide comfort for the family of Frederick Wallace with a meaningful gesture of sympathy.

He graduated from Calais Memorial High School in 1963. In 1966, he married the love of his life, Linda Sprague. They then welcomed their children, Jeffrey, Joseph, Tanya and Tracey. Through the years, Freddie was a jack of all trades, working hard to support his family. In the earlier years, he worked in the woods, but for the majority of his working years, he was self-employed doing construction work, plowing and sanding. He was known to say, “When in a fix, dial 7766”. He owned and operated Wallace’s Bus Service in Alexander for many years, retiring in 2016 when son Joe took the reins. In retirement, he had many health struggles, but his love and dedication for his family never wavered. Over the years, he has enjoyed playing many cribbage games with his family and at Randy’s Variety. Fred was a member and Past Master of Lewey’s Island Lodge #138 A.F. & A.M. in Princeton. He was a dedicated Red Sox fan (when they were winning), an avid viewer of RFDTV and the Game Show Network. However, his greatest joy came whenever he was surrounded by his family.

A celebration of Fred’s life will be held 11 a.m. Saturday, August 17, 2019 at the Alexander Cemetery. In lieu of flowers, donations may be made in his memory to the Alexander Volunteer Fire Department, 50 Cooper Rd., Alexander, ME 04694. Arrangements by Mays Funeral Home, Calais & Eastport.
Read Less

Consider providing a gift of comfort for the family of Frederick Wallace by sending flowers.

We encourage you to share your most beloved memories of Frederick here, so that the family and other loved ones can always see it. You can upload cherished photographs, or share your favorite stories, and can even comment on those shared by others.

Posted Aug 15, 2019 at 07:22pm
Linda: So very sorry for your loss. Freddy was a great guy! If there is anything I can do don’t hesitate to call. I’ll keep you and your family in my prayers.
Comment Share
Share via:
SP

Posted Aug 15, 2019 at 09:30am
Linda and family,
I an so sad to hear of Freddy's passing. He is a true Alexander icon. He was one of Wayne's first friends when we moved to Alexander many years ago and remained so over the years. He will be greatly missed by everyone in this town, but his memory will live on for all that knew him. May your memories keep him alive in your hearts forever. I cannot attend the funeral on Saturday but you will be in my thoughts and prayers.
Sherry Parks
Comment Share
Share via:

Posted Aug 15, 2019 at 08:22am
My sincerest condolences to Fred's family . I always remember him having a smile on his face whenever I saw him.
Comment Share
Share via:
F

Posted Aug 14, 2019 at 06:47pm
To the Wallace family I am so sorry for your loss Freddy was good man and will be missed
Comment Share
Share via: 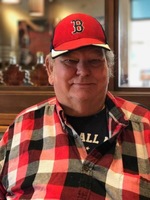