To share your memory on the wall of F. Raymond Beaulieu, sign in using one of the following options:

Provide comfort for the family by sending flowers or planting a tree in memory of F. Raymond Beaulieu

Provide comfort for the family by sending flowers or planting a tree in memory of F. Raymond Beaulieu

Print
Calais – F. Ray Beaulieu Jr., 62, passed away unexpectedly Sunday, May 3, 2020 on Bearce Lake in Meddybemps. Ray was born in Calais on September 6, 1957, son of the late Francis and Ruth (Deacon) Beaulieu.

After graduating from Calais... Read More
Calais – F. Ray Beaulieu Jr., 62, passed away unexpectedly Sunday, May 3, 2020 on Bearce Lake in Meddybemps. Ray was born in Calais on September 6, 1957, son of the late Francis and Ruth (Deacon) Beaulieu.

After graduating from Calais High School, Ray’s passion for flying led him to attend Air Tech in Limerick, where he graduated with a degree in Mechanical Engineering and earned his A&P License. He moved to Boca Raton, FL where he worked as an aircraft mechanic. Eventually Ray moved back home to Maine, helping his father in the family business, Beaulieu’s Locksmith. He worked for the Calais Water Department and currently was employed at Johnson’s True Value.

Ray was proud to be a Mason. He was Past Master of St. Croix Lodge No. 46 in Calais, Crescent Lodge No. 78 in Pembroke, and Lewy’s Island Lodge No. 138 in Princeton; Past High Priest of St. Croix Chapter No. 17; member of Orion Chapter No. 45 O.E.S.; and served as District Ritual Instructor for the Second District of Grand Lodge of Maine. Ray was a private pilot and was a member of CAF Rise Above Wasp and an organization for aircraft mechanics. He was an avid outdoorsman and enjoyed kayaking, fishing, flying airplanes, attending air shows and the Rockland Blues Festival.

Ray loved to spend time with his grandson Grayson. The had a very special bond, always talking about comics and movies. Grayson referred to them as the “Geek Squad”. When together, it was very hard to get a word in edge wise. Ray and Grayson treasured their time together.

In keeping with Ray’s wishes, there will be no services. In lieu of flowers, donation’s in Ray’s memory may be made to PAWS, 368 South St., Calais, ME 04619. Arrangements by Mays Funeral Home, Calais & Eastport.
Read Less

Receive notifications about information and event scheduling for F. Raymond

We encourage you to share your most beloved memories of F. Raymond here, so that the family and other loved ones can always see it. You can upload cherished photographs, or share your favorite stories, and can even comment on those shared by others.

Posted May 11, 2020 at 02:04pm
My sincerest sympathies to Brother Ray and my friend Ray's family. We went to school together, did science projects in grade school, built model airplanes and flew them in his backyard along with Steve Farrar..... Well Ray you finally got the best pilot's seat in the house!!
Comment Share
Share via:
AB

Posted May 09, 2020 at 12:31pm
So sorry to read of Ray's passing. Please accept my sincere condolences. Nice guy, he will be missed.
Comment Share
Share via:
SA

Posted May 06, 2020 at 08:37pm
Sending my thoughts and prayers to Ray's loved ones. When thinking of Ray I see him as he was years ago at Eaton's camp, on the water, jamming with his band, going through comic books or talking about his latest, greatest gadget. Rest in peace Ray. My sympathies to you Jill & family.

Posted May 06, 2020 at 09:33am
Sorry to hear of Ray's passing, Ray was one of the most intelligent members of our class of 75, we shared many laughs with our shared sense of humor. Right now Ray is flying above the clouds where he loved to be. Pete Brennan
Comment Share
Share via:
HS 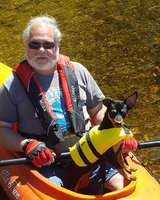