To share your memory on the wall of Eleanor Dean, sign in using one of the following options:

Eleanor was born, raised, and lived in Binghamton for 57 years. She developed very special friendships that continued right until her death. One very special memory Eleanor had was of frequently taking goldenrod to her best friend Vicky who was highly allergic. Thus, Eleanor’s unique humor and fun loving life began.

Both of her parents had a strong influence on her life. Her father taught her to fish, bait her own hook and later to fly-fish, a love that continued throughout her life. Eleanor followed her mother’s career and went to Binghamton General Nursing School where she obtained her RN degree. She was a nurse at General Hospital, a private duty nurse and later a medical claims analyst for Blue Cross Blue Shield.

It was during her time at nursing school when she met her soon to be husband at Swat Sullivan’s, a local place where Eleanor would go for her favorite drink of Pepsi, with lots of ice! Weibley, “Jerry” Dean and Eleanor married and spent the next years raising their three children in Hillcrest, NY.

The family spent many great times at their cottage on Petunia Lake, in Greene, NY. Although lake fishing was fun, Eleanor’s true enjoyment was fly-fishing. Her kids often laugh at the times she allowed them to play hooky to go fly-fishing on the Genegantslet Creek on opening day. Later, Eleanor even learned to tie her own flies and had a small side job. Although most of the money she earned at this job was soon lost when the pet dog got into the jigs and then had to have surgery to remove them from her lips. Thus, Eleanor’s fly-tying career was halted.

Eleanor later introduced her family to a favorite fishing spot, Victoria Lodge, in Canada. There they spent several vacations fishing for perch, northern pike, and walleye. Eleanor always had hopes of landing the elusive “Big Louie,” with her special lure, but alas, that never came to be.

After retiring, Eleanor and Jerry built a camp on Meddybemps Lake and then moved to Alexander, Maine. Here, mom took up bird watching and enjoyed drives looking for wildlife. Her life was never complete though without her beloved pets, all accept Jerry’s goat.

Eleanor was a member of the Order of the Eastern Star. In August of 2019 she became a member of Second Baptist Church in Calais. When she couldn’t attend in person due to ailments, she would watch the morning services through the internet. She felt very accepted and at home in this church.

Eleanor was predeceased by her husband, Weibley “Jerry”, her parents, George and Winifred Streby, her brother and sister-in-law, Harold and Gloria Streby, and brother-in-law and wife, Paul and Cynthia Tice. She is survived by her three children, daughter and son-in-law Karen and Bob Baum, of Germantown, MD, daughter Koreen W. Dean of Alexander, and son and significant other Weibley J. Dean II and Karyn Demmons of Alexander. She is also survived by granddaughters Sarah and Cassandra Regan, brother-in-law Samuel K. Dean and wife Joyce of Big Flats, NY as well as many nieces and nephews, cousins and very special friends from NY and Maine.

Mom’s love of God, nature, fishing, country, and pets, as well as her phobia of snakes, will always live on in her children. Her sense of humor, compassion and love will greatly be missed. The family is at great peace knowing Mom and Dad are together again continuing their mission in search of “Big Louie.”

Visiting hours will be held 6-8 p.m. Wednesday, January 29, 2018 at Mays Funeral Home, 26 Church St., Calais. A Celebration of Eleanor’s Life will be held at the funeral home at a later date. In lieu of flowers, donations may be made to the Alexander Volunteer Fire Department that assisted mom day and night numerous times over the last several years.
Read Less

Receive notifications about information and event scheduling for Eleanor

Consider providing a gift of comfort for the family of Eleanor Dean by sending flowers.

We encourage you to share your most beloved memories of Eleanor here, so that the family and other loved ones can always see it. You can upload cherished photographs, or share your favorite stories, and can even comment on those shared by others.

Posted Jan 19, 2020 at 05:26pm
“God himself will be with them. And he will wipe out every tear from their eyes and death will be no more, neither will mourning nor outcry nor pain be anymore. The former things has passed away.” (Revelation 21:3,4)
Comment Share
Share via:
AW

Posted Jan 19, 2020 at 10:07am
Brother weibley and family:
I was saddened to learn of the passing of your loved one. My heart believes that there is no death but a passing from earthly conditions to those of Heaven where there is no longer any sadness or pain. There is only happiness with the reunion of those loved ones that have gone before us. I pray for all of you to find peace.
Al Weickers
Comment Share
Share via:
RO

Posted Jan 19, 2020 at 06:59am
What a wonderful tribute to you Mom. Eleanor led such a full life! We enjoyed every meeting and visit we ever had with her! And for you to know that she is reunited with loved ones is the best gift of all! May the memories and stories you have forever bring a smile to your face and joy to your hearts. Fly High Eleanor!
Comment Share
Share via: 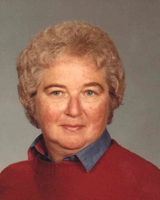