To share your memory on the wall of Edward Arbo, sign in using one of the following options:

Ed and his siblings were raised on the homestead know... Read More
Charlotte – Edward Payson Arbo, 99, passed away at home surrounded by family on Thursday, July 9, 2020. Ed was born in Brownville on May 13, 1921, son of Paul and Lucy (Goss) Arbo.

Ed and his siblings were raised on the homestead known locally as Prairie. The Prairie was a large field which they made into an airstrip, refueling station, store and dance hall known as the Pavilion. This is where Ed developed his keen interest and love in flying. After graduating from high school, he went on to the University of Maine, earning his degree in Sociology in 1942. Following college, Ed joined the U.S. Army where he learned to fly.

Ed purchased his first plane in 1946 and has owned a total of 6 planes, 2 of which were biplanes. In 1968 he bought his current plane, a 1948 Aeronca Sedan. Only 501 of these four seater Aeronca Sedans were ever made. In the past years, he was fortunate enough to fly to Oskosh, Wisconsin three times to attend a huge Antique Airplane Convention.

After the Army, Ed tried to run the Prairie Airport in Brownville by himself, while cutting wood for additional income. He was visited by an Electrolux salesman who convinced Ed to purchase a vacuum cleaner even though he really couldn’t afford it. It was at that point that Ed felt that he could do that job and started to sell vacuum cleaners.

In the 1960’s, Ed and his wife Maxine moved to Meddybemps. In 1976 they relocated to Charlotte where he was able to create an airstrip out of a blueberry field. Ed was known throughout Washington County as “Flying Ed Arbo, the Electrolux Man”. He had one of the best sales records in the State of Maine for many years. Ed will be remembered by many for his easygoing personality, strong work ethic, and a commitment to customer satisfaction

In addition to being an accomplished Pilot and Salesman, Ed also was a budding author. He wrote a book about his life experiences with the catchy title, “Ten Thousand Housewives Have Said Yes to Me.”

Special thanks and appreciation goes to his caretaker and friend, Sally Ketchen, who went above and beyond in her care for both Maxine and Ed.

In addition to his parents, Edward was predeceased by his beloved wife of 63 years, Maxine (Dodge) Arbo; his sister Priscilla Osgood and her husband Greg; brother-in-law, Kenneth Dodge; sister-in-law, Hilda Lister; and a nephew Roger Clifford. Surviving are his three children, Diane James and husband Cary of Orono, Tammi Smith of Meddybemps, and Scott Arbo and wife Amber of Princeton; six grandchildren, Evan James and fiancé Amanda Paez of Orono, Ross James and wife Molly of Charlestown, MA, Mindy Brown and husband Chris of Milford, Bonnie Smith and companion Matthew Ayer of Franklin, NH, Daniel Wallace and companion Michaela Carson of Meddybemps, and Ryan Arbo of Portland, and two step-grandchildren, Ryan and Shain McIver, both of Princeton; three nieces, Christine Straub, Ingrid Morton, and Rebecca Donovan; a nephew, Paul Clifford; many nieces, nephews and cousins; and his feline companion Kitty.

A Celebration of Life for both Ed and Maxine will be held 11 a.m. Saturday, August 8, 2020 at Meddybemps Cemetery. Donations in Ed and Maxine’s memory may be made to PAWS Bravehearts, 368 South St., Calais, ME 04619. Arrangements by Mays Funeral Home, Calais & Eastport.

Receive notifications about information and event scheduling for Edward

Consider providing a gift of comfort for the family of Edward Arbo by sending flowers.

We encourage you to share your most beloved memories of Edward here, so that the family and other loved ones can always see it. You can upload cherished photographs, or share your favorite stories, and can even comment on those shared by others.

Posted Jul 13, 2020 at 05:03pm
Deep sympathy, love and prayers to Ed's family. He was a remarkable man who will be remembered by many throughout Maine. Barry & Linda Baniszeski - Meddybemps
Comment Share
Share via:
BM

Posted Jul 12, 2020 at 03:57pm
Sending our thoughts and prayers to the Arbo families in the loss of their Dad and Grampy. He was definitely one of a kind and will be missed by all who knew him. As you shed your tears I am sure you will also be laughing at the memories. Thinking of you as you grieve this loss.
Comment Share
Share via:
LT

Posted Jul 09, 2020 at 09:30pm
Ed was very special. He was kind to everyone and loved to fly, and now has truly flown into the heavenly realm with the Lord. God bless those who remain! 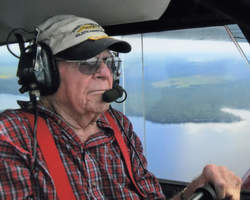