To share your memory on the wall of Edna Chambers, sign in using one of the following options:

Provide comfort for the family of Edna Chambers with a meaningful gesture of sympathy.

Shortly after graduating from Calais Memorial High School, Edna started her career at McDonald’s where she eventually became manager of the Calais location. Edna retired from the Calais McDonald’s with over 35 years of service. She enjoyed playing bingo, scratch tickets, and spending time with her family and friends.

In addition to her parents, Edna was predeceased by a sister, Mavis McCullough; and a nephew, Kevin Barnard. Surviving are her three sisters, Rose Corbett of Marshfield, Sandra Sprague of Calais, and Brenda Woodcock and husband Pete of St. Stephen, NB; two brothers, Milton Chambers and wife Marion of Calais, and Roland Chambers of Eastport; and many nieces and nephews.

Consider providing a gift of comfort for the family of Edna Chambers by sending flowers.

We encourage you to share your most beloved memories of Edna here, so that the family and other loved ones can always see it. You can upload cherished photographs, or share your favorite stories, and can even comment on those shared by others.

Posted Sep 29, 2019 at 01:34pm
Edna was a very special lady, when Jim & I went to McDonalds she always took such great care of us, later at Washington place she invited me to see her room & it was fixed so nice, just like a Doll House, She will be missed by so many. Rest in peace Dear Edna.
Comment Share
Share via:
M

Posted Sep 27, 2019 at 03:57pm
To the Chamber family: Sending our prayers and thoughts with all of you as you celebrate your sister's life. She always had a smile and was a lot of help to anyone who asked. Fondly remembered. Bob and MaryLou McGraw
Comment Share
Share via:

Posted Sep 27, 2019 at 08:56am
Aunt Edna, I just want to say you will be missed. Dementia takes so much of who we are away. It's a awful disease. I will keep praying for a cure! You are now free. Rest easy and fly high. I love you!❤
Comment Share
Share via:
KG

Posted Sep 26, 2019 at 06:23pm
Worked with edna good many years. She was a great lady. I remember her always singing grandma got run over by a reindeer.
Comment Share
Share via:
RM 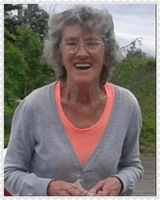 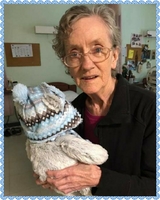