To share your memory on the wall of Dorothy Daggett, sign in using one of the following options:

Receive notifications about information and event scheduling for Dorothy

Consider providing a gift of comfort for the family of Dorothy Daggett by sending flowers.

We encourage you to share your most beloved memories of Dorothy here, so that the family and other loved ones can always see it. You can upload cherished photographs, or share your favorite stories, and can even comment on those shared by others.

Posted Jun 09, 2020 at 07:46am
To Dave and family,
I was sorry to hear of your Mum's passing. I grew up knowing your Mum, Mary and Ralph. Everyday me and my sister Jean went to your grand parents store in Baring and got an ice cream. One scoop was 6 cents. I have fond memories of the Stuart family. I am sorry to have missed her service in Baring.
Comment Share
Share via:

Posted Jun 04, 2020 at 03:56pm
Cathy and family, sorry for your loss, sat beside Dot and Alvin at many a little League baseball game years ago. We had the same mindset, enjoyed those visits
Comment Share
Share via:
A

Posted Jun 04, 2020 at 01:23pm
Sending my condolences to Kathy, David, Joey, Brielle and Robert. Dottie was like a second mom to me from the age of 6 weeks to 6 years. I remember her teaching me colours with barrettes. I also remember the beautiful sweaters she knit for me. She will be greatly missed.
I would have liked to attend her service but unfortunately with the border closed, I will not be able. Will be thinking if you all.
Comment Share
Share via:
M

Posted Jun 03, 2020 at 07:06pm
So very sorry to hear of your mother’s passing. She was a close friend; one of the Baring girls. We have fond memories of Christmas Eve at your parents house. Thinking of you all. Alice, Ann, Amy and families.
Comment Share
Share via: 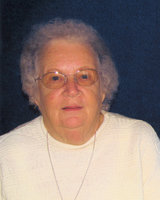