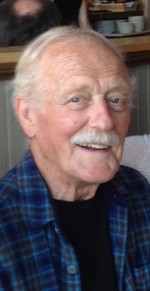 Eastport – David Carey MacNichol, 87, passed away peacefully on Friday, December 6, 2019 at Northern Light Eastern Maine Medical Center in Bangor ME as the result of a stroke. Dave was born in Eastport ME on April 18, 1932, the firstborn son of Col. Alexander A. MacNichol and Genevieve (Roche) MacNichol.

Dave graduated from Shead High School and the Maine Maritime Academy and was shortly afterwards drafted into the Army. He became one of the few to be able to call themselves a “Blue Nose", crossing the Arctic Circle in August 1955 while serving aboard the USS Fort Mandan in the Transportation Corps. He was awarded the US Soldiers Medal for heroic action. Returning back to Eastport, Dave worked with his father at MacNichol Ford Sales for a number of years. He loved being a volunteer fireman and served faithfully. Dave later went on to earn BS and MS degrees in History at the University of Maine in Orono. He had a career in banking as a bank examiner for the Federal government and then at the Maine National Bank in Portland, where he specialized in municipal bonds. He retired to Eastport in 2007. He enjoyed gardening and was an avid reader. Dave considered one of his greatest achievements to be bringing his daughter into this world. As a father he stressed the importance of living with compassion and humility and always carrying yourself with grace. A staunch supporter of the Democratic party, Dave paid close attention to current events and always urged people to look at any issue from both sides. He will also be remembered for his old-world manners, eloquent speaking voice at the podium and love of a good martini. A man of many lives, he will be missed by all.

In addition to his parents, Dave was predeceased by his brother Alexander MacNichol. Surviving are his sister Susan MacNichol of Eastport; his daughter Leah MacNichol of Portland; his beloved wife of 5 years, Patricia (McGuire) Christopher of Eastport; and many cousins, nieces and nephews.

Visiting hours will be held from 1 to 3 p.m. Friday, December 20, 2019 at the Institute Hall of Christ Church, 21 Key Street, Eastport. A memorial service celebrating his life will be held Friday, June 19, 2020 at Christ Church. In lieu of flowers, donations in Dave’s memory can be made to the Peavey Memorial Library Restoration Fund, 26 Water St., Eastport, ME 04631. The family wishes to express their appreciation to Northern Light Home Care and Hospice in Bangor for their compassionate care. Arrangements are by Mays Funeral Home, Calais & Eastport.