To share your memory on the wall of David Chapais, sign in using one of the following options:

Sheppy was a Communicant of St. Joseph R.C. Church in Eastport and served on the Saint Kateri Teckawitha Parish Finance Council. He loved helping children and spent numerous hours volunteering as a D.A.R.E. Officer, several years with the Big Brothers Big Sisters Program where he has mentored countless young people, and most recently the Faith Formation Team at Pleasant Point. He was an active community member and his influence and impact is far reaching at individual and community levels.

In addition to his parents, Sheppy was predeceased by a sister Brenda. Surviving are his two children, Brianna Iversen and husband Nathan of Lansing, MI, and Brandon Chapais and wife Aubry of Paw Paw, MI; three grandchildren, Madison Elaine Iversen, Jackson David Chapais, and Hudson Todd Chapais; four sisters, Doreen Kilby and husband Phillip of FL, Linda Frye of NC, Becky Kierstead of Eastport, and Diane Jamieson and husband Fred of Limestone; many nieces, nephews and dear friends; and his “extended family” in the law enforcement community throughout the state of Maine.

Due to COVID restrictions, a Memorial Mass will be celebrated at a future date. Arrangements by Mays Funeral Home, Calais & Eastport.
Read Less

Receive notifications about information and event scheduling for David

We encourage you to share your most beloved memories of David here, so that the family and other loved ones can always see it. You can upload cherished photographs, or share your favorite stories, and can even comment on those shared by others.

Posted Nov 16, 2020 at 10:41am
Farewell Chief "Sheppy" It was great working with you at SWH Police Department...Remember you got the place re-built and modernized. I loved getting into Coast Guard Sea stories with you. You will be missed by all of us old-timers at SWHPD and well as fellow retired Coast Guardsmen!
Comment Share
Share via:

Posted Nov 04, 2020 at 04:39pm
A great friend, classmate and fellow Coastie has sailed on. You will be sadly missed by your family, and your many friends. We had a lot of fun growing up, playing ball, and going to school, and serving in the Coast Guard. I will miss you my old friend. Til we meet again. Joe Wentworth
Comment Share
Share via:
SE

Posted Nov 03, 2020 at 07:44pm
A good man who will be missed....we are actually double cousins Chapais on Dad's side and Hooper on Mom's
Comment Share
Share via:
HD

Fair Winds and Following seas Coastie to Coastie , we have the Watch 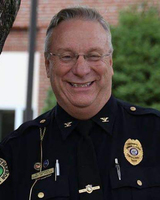