To share your memory on the wall of Corina Tomah, sign in using one of the following options:

After attending Lee Academy, Corina joined the Job Corps for several years. She eventually returned home to Indian Township and earned her C.N.A. at Washington County Community College. Corina’s love of the outdoors lead her to become an Environmentalist for the Indian Township Tribal Government. She was social butterfly and enjoyed music, dancing, singing and tending to her plants. Corina loved being a mother and sharing her love and home with many foster children over the years.

Receive notifications about information and event scheduling for Corina

Consider providing a gift of comfort for the family of Corina Tomah by sending flowers.

We encourage you to share your most beloved memories of Corina here, so that the family and other loved ones can always see it. You can upload cherished photographs, or share your favorite stories, and can even comment on those shared by others.

May you always draw comfort from the strength of the roots planted within your family values and traditions and find new resolve in the branches that continue to spread and grow.

Posted Dec 09, 2019 at 02:04pm
Corina, I pray for you and the family. You were a beautiful woman, and loving mom. I send my strength the entire family.
Comment Share
Share via:
EW

Posted Dec 08, 2019 at 09:04pm
“God himself will be with them. And he will wipe out every tear from their eyes
and death will be no more, neither will mourning nor outcry nor pain be anymore.
The former things have passed away. (Revelation 21:3,4)
Comment Share
Share via:

Posted Dec 08, 2019 at 12:19pm
Corina, remembered as a beautiful natve woman with a warm and cheerful smile. Condolences to the family, so sorry for your loss. Madonna
Comment Share
Share via: 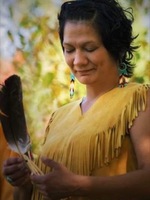