To share your memory on the wall of Christopher Francis, sign in using one of the following options:

Chris was born the youngest child to Gene Wayne Francis, Sr. and Bernadette (Lola) Francis on
November 18, 1976 i... Read More
Pleasant Point - Christopher Joseph “Doobie” Francis, 43, walked on to his journey on
November 16, 2020.

There will be no services until 2021 due to the COVID-19. Arrangements by Mays Funeral Home, Calais & Eastport.
Read Less

Receive notifications about information and event scheduling for Christopher

We encourage you to share your most beloved memories of Christopher here, so that the family and other loved ones can always see it. You can upload cherished photographs, or share your favorite stories, and can even comment on those shared by others.

Posted Nov 29, 2020 at 10:44pm
He was such an awesome person. RIP Christopher and prayers to Gene Wayne and Bernie Francis. Your in my thoughts.

Posted Nov 21, 2020 at 05:40pm
Bernie, Gene Wayne, and the rest of his loved ones, family & friends. My heart goes out to all of you on the loss of your son Chris. May the memories of your life with him, help to get you through this tremendous loss. I will keep you all in my heart and my prayers 🙏❤️. Wishing you much love and strength. Annie
Comment Share
Share via:
C

Posted Nov 20, 2020 at 02:34pm
I am so very saddened by losing this special person, Chris. I feel so fortunate to have had Chrissy in my life. Every time he and I greeted each other, it was with a smile and a hug. Those who knew Chrissy, know he was a very funny, thoughtful, and caring individual. He will be missed so much! My love and condolences to his family❤️
Comment Share
Share via:
SL

Posted Nov 18, 2020 at 02:04pm
Gene and Bernie, we are so sorry about the loss of Chris. He was an awesome young man and father. We loved him so much and will miss him. If there is anything you need, please let us know. We love you all and are here for you. ❤️❤️
Comment Share
Share via: 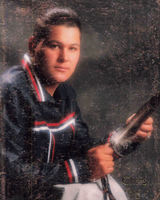