Order a Book of Memories™
for Your Loved One
Learn More

We are here to help you. If you have need of our services, please call us, day or night. Or, if you prefer, you can fill out the form on the right.

Are you thinking about pre-planning your funeral? Pre-planning is the best way to choose how you're remembered, to ease the emotional and financial burden on your loved ones, to protect yourself from rising funeral costs, and to let your family know your final wishes.

To share your memory on the wall of Carmella Walton, sign in using one of the following options:

Shortly after graduating from high school in New York, Carmella met her future husband, James Walton. They eventually moved to Jim’s home state of Maine, settling in Princeton where they raised their three sons. Carmella was a faithful member of Second Baptist Church in Calais where she sang in the choir. Along with her husband Jim, Carmella ran the Irene Chadbourne Food Pantry in Calais for many years. She enjoyed playing Bingo, baking, and helping others in need.

In addition to her parents, Carmella was predeceased by her beloved husband of 46 years, James Walton; a brother Pauly; and a sister Angie. Surviving are her three sons, James Shannon Walton and wife Martha of North Carolina, Shawn Walton of Calais, and Scott Walton and fiancé Brenda Edgerly of Pembroke; several grandchildren and great-grandchildren; a sister Lilly of Le Roy, NY; many sisters-in-law, brothers-in-law, nieces, nephews and friends; and her extended family at Second Baptist Church.

In keeping with Carmella’s wishes, there will be no services. Donations in Carmella’s memory may be made to the Irene Chadbourne Ecumenical Food Pantry, PO Box 1005, Calais, ME 04619. Arrangements by Mays Funeral Home, Calais & Eastport.
Read Less

Receive notifications about information and event scheduling for Carmella

We encourage you to share your most beloved memories of Carmella here, so that the family and other loved ones can always see it. You can upload cherished photographs, or share your favorite stories, and can even comment on those shared by others.

Posted May 11, 2020 at 03:27pm
To Carmella;s boys and their families. So had to read this. A lot of great memories throughout the years with Carmella and Jim. Loved those two. She was a very talented lady. Loved working with her on sewing projects and her cooking was incredible. You were very blessed having her as your Mom. Our church was so blessed having them in it. Sending my thoughts and prayers as you say goodbye. RIP Carmella. Always remembered. Bob and MaryLou McGraw
Comment Share
Share via:

Posted May 10, 2020 at 10:06pm
So very sorry to hear of Carmella's passing, she was such a lovely lady. I always enjoyed our chats over the years. She will be greatly missed.
Comment Share
Share via: 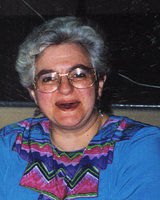