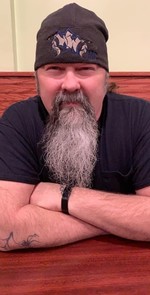 Baileyville – Blaine Galen McLaughlin Jr, 50, passed away holding the hand of his beloved Sonya on Monday, June 1, 2020 at Northern Light Eastern Maine Medical Center as a result of a motorcycle accident. Blaine was born in Calais on November 9, 1969.

After graduating from high school, Blaine went on to earn his CDL to drive trucks. He drove truck for over 20 years, hauling logs for L.R. Hamilton and later for R.A. Crawford & Sons. In 2017, Blaine accepted a position with Woodland Pulp LLC, where he was working as a millwright.

Blaine was an avid outdoorsman and enjoyed fishing. His passion was riding his Harley Davidson. Blaine was a member of the Wabanaki Warriors. His most cherished moments were times spent with his family.

A Celebration of Blaine’s Life will be held at a later date. Arrangements by Mays Funeral Home, Calais & Eastport.