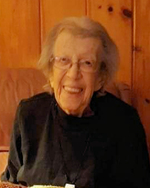 Baring Plantation – Bertha W. Johnson, 89, passed away peacefully on Christmas Eve, December 24, 2018 at Calais Regional Hospital. Bertha was born on February 2, 1929 to Frank and Alice (Justason) Wakefield in Bath where she graduated high school. Her family later moved to Baring Plantation during the depression where she met Arthur Johnson, they were married on December 29, 1956 in Calais.

Bertha held a position for multiple years in Augusta, working as a clerk for the Maine State Government. She would travel to Augusta from Baring on Sunday nights and return home on Friday after work. She later dedicated many years to Baring Plantation doing clerical work and other tasks within town management.

Bertha was an independent, involved, vocal, honest woman. She was a Republican who loved to talk politics and was never shy addressing the difficult matters she cared about. She was tough but also very loving. Bertha took great pride in her flower garden, she would spend hours working in her yard and enjoyed every minute. Bertha was a wonderful baker, an experienced couponer and an avid reader of the Bangor Daily News. She loved watching the Patriots, particularly Tom Brady, and The Big Bang Theory where she first heard the song Soft Kitty, a song that her great granddaughter would sing to her in recent months.

In addition to her parents, Bertha was predeceased by her husband, Arthur Johnson; her sister, Shirley Dudley; two brothers, Wallace and Robert Wakefield; brother-in-law, Dunk Johnson and her son-in-law, George Murphy.

She will be remembered by her daughter, Debbie Murphy; granddaughter, Kimberly Bridges and her husband, John of St. Stephen, New Brunswick; three great grandchildren, Katie-Lynn Bridges of Calais, Heather Bridges and John Bridges Jr; a great-great granddaughter, Zoey Alice Ann Bridges-Armstrong, all of St. Stephen; three nieces, Linda Dudley of Eastport, Susan Casey and her husband Pete of Baring and Sherri Wakefield of Calais; nephew, Brian Dudley of Eastport; many friends, include her dear friend, Becky Seel and her great grand dog, Chance.

A memorial service will be held 1:00 pm, Saturday, December 29th at Mays Funeral Home, 26 Church St., Calais with Pastor Bobby Oliver officiating. All are invited to a gathering at Baring Baptist Church following the memorial service.