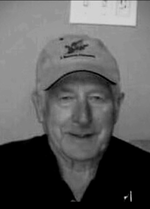 Calais - Bernard “Bernie” Leon Johnson of Red Beach passed away on June 2, at his home in Red Beach. Bern was born in Robbinston on February 17, 1931 to Frank and Nancy (Trimble) Johnson of Robbinston.
Bern is predeceased by his brothers Bob, Calvin, Carol (Snook), and his half-siblings Marion, Leona, Kenneth and Albert. He is survived by his big brother Ernest “Bud” Johnson.

Bern graduated from Calais Memorial High School in 1949 and married Eleanor Neilsen of Red Beach in 1951. After forays in the Millinocket area, and in Florida for six years, where he worked as a marble cutter, they settled into a house in Red Beach where he lived until his passing. Although a farmer at heart, Bern began a career at the Georgia Pacific Mill in Woodland which lasted until his retirement 28 years later. During his working years Bern was also a member of the Army National Guard, most prominently with the 262 Engineering Battalion in Calais, and retired at the rank of sergeant after 21 years of service.

Bern and Eleanor had four children. The girls Sharon Johnson and her husband Don Leachman, and Donna Johnson-Jack Tucker and her husband Gene Tucker. The boys David and wife Debby, and Chris and his partner Jeri Hill. Bernie had a baseball team of grandsons: Jeffrey, Joe and Jason Pottle, Paul and Michael Jack, Adam and Matthew Johnson, and Nicholas and Logan Johnson. Some of those boys then helped to create a slew of great-grandchildren (both boys and girls in this round). And there is currently a great-great-grandchild in the oven.

After Eleanor’s death in 2005, Bernie went on to marry Ann Neddeau of Princeton. They shared many memorable moments fishing, hunting, four-wheeling and just chatting on their porch swing on the deck. Together they built a new house at the old address in Red Beach and shared a life of great love, laughter, and devotion.
Surviving Bern along with his wife Ann Johnson are her three daughters: Brenda Leighton, Debra Wright and husband Gary, and Mindy Allen and husband Arthur. Bern’s marriage to Ann not only added three more daughters to his life they brought with them seven grandchildren and eight great-grandchildren all of whom embraced him with great affection, loved him, and will miss him dearly.

An avid outdoorsman who especially enjoyed hunting, fishing, snowmobiling and four wheeling he was a member of the Calais Rod and Gun Club, and may have been one of the finest bobcat hunters in the country. Bernie also enjoyed baseball and softball and managed the Robbinston Colts of the local softball fast pitch league in the sixties and seventies. Bern was also a member of Sherman Brother’s Post #3 American Legion in Calais and was a fixture at Memorial Day parades marching in uniform
Bern also had an amazing sense of humor and his pranks; including the cardboard deer and the frozen coyote are the stuff of legend.

Bern was not only a great father to his own offspring he thought of his nephew Russell Johnson as another son. Bern enjoyed so many wonderful friendships especially those of Carl Ross, David Brown and the late Bill Pulk. Of course, there is also Katie Dog who will be lost without Bernie reading his newspaper at the kitchen table.
However, his very best friend, Alden Mingo, summed up the life of Bernard Johnson in the most perfect way. Alden said of Bern, “I never knew the man to have an enemy.” ‘Nuff Said?

Graveside services are planned for the Red Beach Cemetery on Saturday June 15, at 11:00 with a reception to follow at the home of Ann Johnson. In lieu of flowers, donations in Bern’s memory can be made to the Red Beach Scholarship Fund, care of Crystal Gallina P.O. Box 413, Calais, Maine 04619. Arrangements by Mays Funeral Home, Calais & Eastport.