To share your memory on the wall of Arthur Furlong, sign in using one of the following options:

Print
Meddybemps - Arthur Wayne Furlong, 76, of Meddybemps passed away June 4th at Calais Hospital after he lost his toughest battle of all, cancer. He was born in Calais on February 6, 1944, son of the late Doris and Damon Furlong.

In his yo... Read More
Meddybemps - Arthur Wayne Furlong, 76, of Meddybemps passed away June 4th at Calais Hospital after he lost his toughest battle of all, cancer. He was born in Calais on February 6, 1944, son of the late Doris and Damon Furlong.

Visitation will be held at Arthur’s home, 23 Lake Shore Lane, Meddybemps, on Friday, June 12 from 6 - 8 p.m. A graveside service with military honors will be held 11 a.m. Saturday, June 13 at Round Pond Cemetery in Charlotte. In lieu of flowers, donations may be made in Arthur’s memory to the Charlotte Vol. Fire Department. Arrangements by Mays Funeral Home, Calais & Eastport.
Read Less

Receive notifications about information and event scheduling for Arthur

Consider providing a gift of comfort for the family of Arthur Furlong by sending flowers.

We encourage you to share your most beloved memories of Arthur here, so that the family and other loved ones can always see it. You can upload cherished photographs, or share your favorite stories, and can even comment on those shared by others.

Posted Jun 05, 2020 at 11:21am
So sorry for your loss. Our thoughts and prayers are with Caroline and her family at this difficult time.
Faye & Jerry Robinson
Comment Share
Share via:
TC

Posted Jun 05, 2020 at 07:39am
Arthur will be remembered by many, an outstanding soldier, especially as First Sergeant of Company A, 262nd Engineer Battalion. SFC(Ret) Tom Copeland.
Comment Share
Share via:

Posted Jun 05, 2020 at 05:52am
Our sincere condolences to the family, Mike and I knew Arthur through the electrical field. A very nice man and always willing to help.Our prayers for Arthur and his family. Rest in Peace , Arthur
Comment Share
Share via:
RM

Posted Jun 04, 2020 at 01:37pm
Carolyn , Brian and Vicki,
So sorry for your loss. You are all in our thought and prayers at this very difficult time.
Comment Share
Share via: 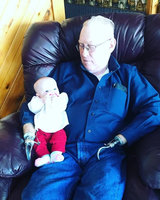